There have finally been released details about the upcoming She & Him (that's Zooey Deschanel and M. Ward) album, Classics. The 13 track collection of cover tunes will be released December 1, and the first single is a version of Dusty Springfield's 1964 song "Stay Awhile" (written by Mike Hawker and Ivor Raymonde). M. Ward's telltale reverb-fueled 60's sound is most definitely intact, and Deschanel's ethereal voice is as sweet as ever. Other songs on the album include "Stars Fell On Alabama", "This Girl's In Love With You", "Time After Time", "Unchained Melody" and "We'll Meet Again". I have to say I am slightly more excited about this release than I would have been about a sixth installment in Rod Stewart's musically related American Classics series. 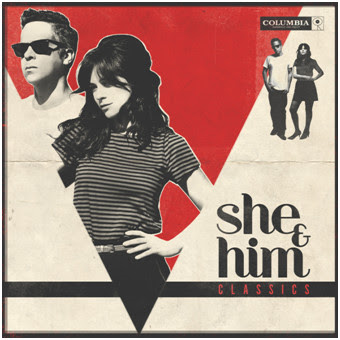