Louis Armstrong - Let's Do It (Let's Fall In Love)

A few days ago I was on a press trip to the Danish area called Sønderjylland, where, among lots of great experiences, I had the immense pleasure of visiting the restaurant Henne Kirkeby Kro where the famous chef Paul Cunningham resides. When he came to welcome us in the restaurant lounge some light Louis Armstrong was playing and Paul immediately complained about what he dubbed "tissemandsjazz". As a courtesy to English-speaking readers I will not translate that term, but I will say that Paul is a better chef than he is a connoiseur of music. He might have been joking when I asked him what he preferred to play when in the kitchen and he answered Chas & Dave, but I can't be sure. On general principle you should be cautious around anyone who calls Louis Armstrong's music "tissemandsjazz", and the fact that you're a former Michelin star chef should not cloud your judgement in that matter.

This version of Cole Porter's classic love song "Let's Do It (Let's Fall In Love)" appears on Ella And Louis Again (1957), the second of three excellent albums he recorded with the lovely Ella Fitzgerald for the Verve label. He appears alone on this one, singing the whole song by himself. So sorry, Paul, your food is amazing, but you need to reconsider Louis Armstrong. I'll say this though; if I were to eat your food again, I'd gladly spend the time doing it listening to Chas & Dave, but I would prefer Louis-s-s-s-s. 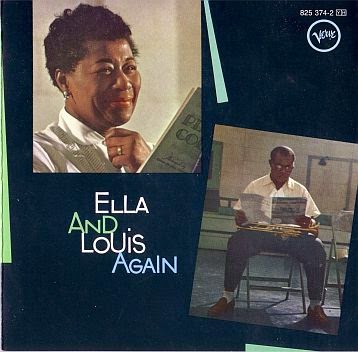