A few people are upset about Robert Plant refusing to do more Led Zeppelin shows or indeed do anything at all with his old cohorts. His musical concerns are elsewhere, and Plant is a singer, songwriter and performer who always looks further ahead, and to put it a tad pompously, to further horizons. And how else do you describe the new record he's made with his band The Sensational Space Shifters? From the title - lullaby and... THE CEASELESS ROAR - and all through the 11 songs, we meet an artist advancing further into what he may see as his musical quest, exploring new ground for each song. "Embrace Another Fall" is a definite highlight, a rhythmic feast with a vocal break towards the end from the fabulous Welsh singer Julie Murphy that makes the whole thing sound Elfish, as if it was taken from one of the Lord Of The Rings or Hobbit films, but with a lot more gusto. Plant and Murphy has collaborated before, on Afro Celt Sound System's 2001 track Life Begin Again, which is almost as beautiful as this one. Anyway, this is absolutely amazing. What an artist Plant is! 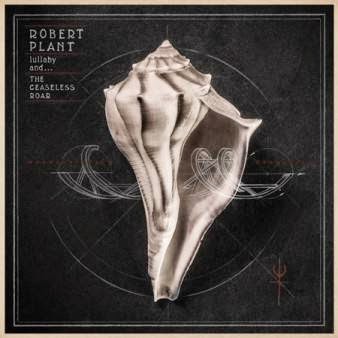