"Ghosts" from Japan's daring Tin Drum album (1981) is the opening track on David Sylvian's recently released solo compilation A Victim Of Stars, seeing as it sort of signals his departure from the band and his embarkation on a further musical journey that has indeed been both strange and wonderful. "Ghosts" is a fabulous song, adventurous and beautiful in equal measures, and strangely, Japan's biggest hit, reaching number 5 in the UK charts in 1982. 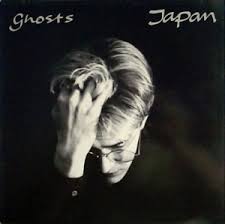