Im Nebel, named after a poem by German author Hermann Hesse, was a post-punk band from the west coast town of Haugesund, Norway, active in the early to mid-1980's. They had two cassette-only releases, and one 7 inch single, before reestablishing themselves as pop band The Colors Turned Red. "Monkanas sang" (Song of the monks) was one of their signature songs, so good in fact that it featured on both their cassettes, Ut av tåkeheimen (a split release with fellow Haugesund band Mausoleum (1983) and Mutasjon 7 (1984). It's gloomy and atmospheric, clearly in debt to the music of Joy Division, and inadvertantly, without any idea that it would happen, paving the way for future artists having success with Gregorian Chants in the 1990's like Enigma and the hit single "Sadeness". 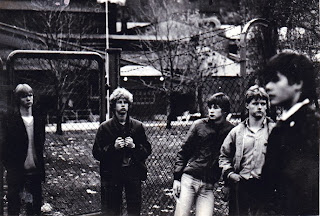