The Human League - Love Action (I Believe In Love)

The Human League's third album Dare (1981) was their commercial breakthrough. It was released after founding members Martyn Ware and Ian Craig Marsh had left to form Heaven 17, and singer Philip Oakey re-established the band with a brand new line-up. "Love Action" was the second single off the album, and at the time of release their biggest hit to date. Incredibly, the most catchy single and their real breakthrough hit was single number four off Dare, "Don't You Want Me". The album was really that good. 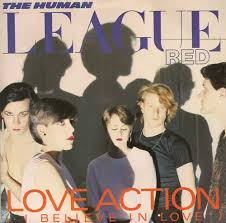