Raga Rockers can easily be called "grand old men" in Norwegian rock music. Their first album, the brilliantly titled The Return Of The Raga Rockers, was released in 1983, and they have just released a new live album called Fritt liv, signaled to be their swansong. We'll see about that... Anyway, "Noen å hate" is one of their finest songs, two and a half minutes of no-nonsense, pure rock'n'roll, lifted from their 1990 album Rock'n'Roll Party. Classic! 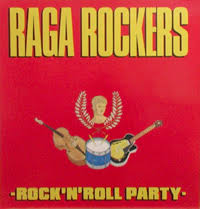