Happy 50th birthday to U2 drummer Larry Mullen Jr.! The last few days I've read several reviews of the anniversary editions of Achtung Baby that were released this weekend saying things along the line of U2 not being as relevant as they once were, as "evidenced" by the relative commercial failure of their last album, 2009's No Line On The Horizon. That may be so, but how many bands can be expected to totally reinvent themselves - more than once - like U2 did with Achtung Baby in 1991? They actually did something similar both in 1984 with The Unforgettable Fire and even more so with 1987's The Joshua Tree. That they didn't succeed quite as much with 1997's Pop album is true, but if nothing else their last few albums show a will and an ability to keep moving forward and doing what they can as good as possible. The fact that they're the world's highest grossing live act is probably as much due to their megalomaniac stage set-ups as anything else, but a U2 show IS cool. Anyway, here's "The Fly" off Achtung Baby, and once more, happy birthday, Larry! 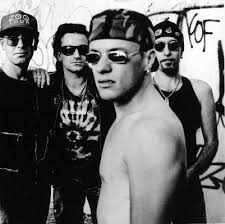