"Rainbow Connection" is the Academy Award nominated theme song from The Muppet Movie (1979), the first time Jim Henson's Muppets appeared on the big screen. It is sung by Kermit The Frog who was voiced by Henson himself until his untimely death in 1990, and was written by Paul Williams and Kenneth Ascher. The song is a beautiful pondering upon the magic of rainbows and morning stars, nothing less than a humbling piece of pop music.It has been covered by a great many artists, like Sarah McLachlan, Willie Nelson, Judy Collins, Justin Timberlake and The Dixie Chicks, and most recently as a collaboration between Weezer and Hayley Williams for the tribute album Muppets: The Green Album. 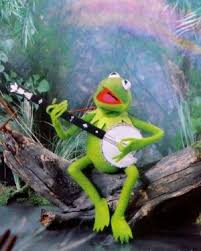