The Smiths - How Soon Is Now?

Happy birthday to former The Smiths guitarist and songwriter Johnny Marr who's 48 today! Here's one of his greatest performances in the guise of "How Soon Is Now?", originally the B-side to 1984 single "William, It Was Really Nothing" and promoted to A-side status the next year after gaining momentum on its own as it was featured both on the Hatful Of Hollow compilation and the Australian and American editions of the Meat Is Murder album. The video unfortunately accompanies the three and a half minute edit of the song that clocks in at 6:46 in its full version. Still, you get the idea of how expressive it is, when you instantly hear Marr's oscillating reverbed guitar effect, a riff that runs on throughout the song and sounds like a Bo Diddley riff from beyond the grave or something. Amazing stuff! 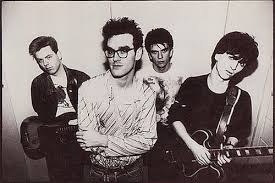