Depeche Mode - Barrel Of A Gun

"Barrel Of A Gun" was the lead single from Depeche Mode's disappointing Ultra album released in 1996. Actually, to me the last great Depeche Mode album was its predecessor Songs Of Faith And Devotion. That aside, "Barrel Of A Gun" is a hell of a good song, a hard industrial-sounding five and a half minutes that was released in the aftermath of singer Dave Gahan's major drug overdose that briefly left him dead before the doctors succeeded in reviving him. Also, this was the first album the band made without founding member Alan Wilder, and both Martin Gore and Andy Fletcher had major problems at the time as well. Seen in this context it's quite impressive that they managed to make any music at all, and especially a single as good as this. 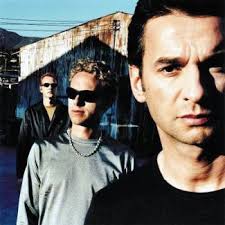