"I dreamt that we were elephants", sings Michael Stipe on R.E.M.'s final, wonderful single "We All Go Back To Where We Belong". It's a beautiful line, and the song is a perfect swansong for the band upon their decision to call it quits after 30 years of making great music. In two weeks Warner will release the double CD compilation Part Lies, Part Heart, Part Truth, Part Garbage: 1982-2011 where this song is one of three newly recorded tracks. "We All Go Back To Where We Belong" could almost be a Burt Bacharach ballad with its light Herb Alpert-y string and horn arrangement. They have made two different music videos for the song, one featuring actress Kirsten Dunst, the other poet and performance artist John Giorno, where they each simply show different facial expressions, shot in black and white. Beautiful stuff and a very fine farewell indeed! 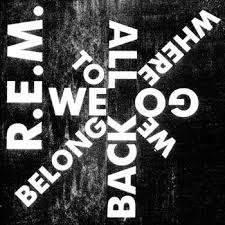