Whitney Houston - Saving All My Love For You

Happy birthday to Whitney Houston who's 48 today! What a waste of talent most of her adult years have been! Debuting at 21 in 1985 with an eponymous album that spawned "Saving All My Love For You" and several more monster hit singles, the world was at her feet. She enjoyed further successes, but in 1989 she met badboy Bobby Brown who was not a very good influence. The pair married in 1992, the same year Whitney enjoyed another huge success with her version of Dolly Parton's "I Will Always Love You" and the soundtrack to The Bodyguard film where she also played the female lead role, which earned her a Razzle Award nomintation for worst actress. From there it went seriously downhill with heavy substance abuse, beatings by her husband and an extraordinary decline. She could have had the world, but ended up scandalized and abused. Unfortunately nothing suggests this will change in the near future, but for now let's enjoy the lady at her peak and hope she'll get better! 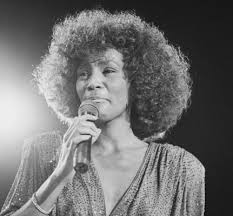