Everything But The Girl - We Walk The Same Line

I play a LOT of Everything But The Girl these days. Tracey Thorn's voice is among the most beautiful to ever grace the world of pop music, and her and partner Ben Watt's compositions are of the same ilk. "We Walk The Same Line" is culled from the album Amplified Heart (1994), which is the one that spawned "Missing", the song that DJ Todd Terry remixed and turned into a monster hit. This song however, is a more traditional EBTG song, written by Tracey alone, and it's the perfect song for when you're down. Someone's usually there to pick you up, even if it's hard to believe when life is at its worst. These are a very comforting four minutes for anyone who's sad, and the song is really, truly pretty. 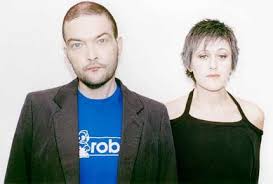