Zooey Deschanel to sing in her own sitcom

Zooey Deschanel, singer/songwriter and actress, will have her own sitcom this autumn, called New Girl about a newly single woman who moves into a house with three men. Deschanel's character is supposedly a very emotional person, and whenever she is overwhelmed she breaks into song. Good thing Deschanel knows how. As one half of the duo She & Him (along with singer/songwriter/producer M. Ward) she has so far released two excellent albums, and she's also been doing some solo work that has appeared in some of her movies. She does a brilliant version of the old Nancy Sinatra classic "Sugar Town" in (500) Days Of Summer for example. New Girl premieres September 20th on Fox in the US. Let's hope it's good, and if so, that it's picked up around the world. 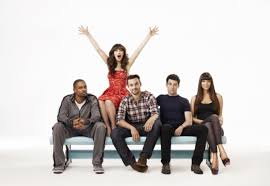