Bobby Darin - Beyond The Sea

Bobby Darin was unlucky person, haunted by tragedy and disease, dying from heart failure aged 37, but what a singer! A successful television personality, film actor, singer and songwriter, he enjoyed several big US hits in the late 50's and early 60's, and among his most cherished ones are "Beyond The Sea", a huge worldwide hit in 1960, but released in 1959. It's originally a French 1946 composition by Charles Trenet called "La Mer" that was transformed into English by Jack Lawrence. Here's a live performance in which Darin gets to show his comic talents at the same time as he's singing all hell out of the song. Classic stuff, and definitely the stuff that legends are made of. Cheers, Bobby! 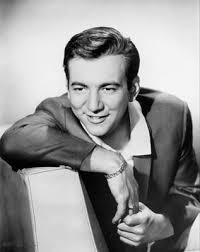