Talking Heads - This Must Be The Place (Naive Melody)

One of my all time favourite concert movies, or performance movies rather, is Jonathan Demme's recording of the Talking Heads show Stop Making Sense from 1984. It's a truly magical film, and among its many highlights is the Speaking In Tongues track "This Must Be The Place (Naive Melody)". It was released as a single from that album, and although the Stop Making Sense version doesn't differ a whole lot, it jumps and grooves a teeny bit more, and is of course accompanied by David Byrne dancing with a lamp. That in itself is worth watching. And if you're ever in a bad mood, just put this song on and you'll smile for the rest of the day. 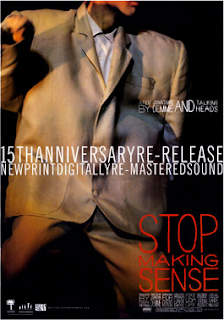