"Blurred Lines" is the current UK number one single, deservedly so. The song struts and jumps and is decidedly very catchy, a killer pop song with a groove to die for. It's the title track and lead single off Thicke's sixth album and a co-write with rapper T.I. and singer/producer Pharrell. The video for "Blurred Lines" is also a lot of fun to watch, with the trio dancing around a group of pretty models while singing the song. There are also ice cream, a bicycle and a few other props involved. As many of you will know Pharrell is also enjoying immense success with Daft Punk at the moment, as he's the voice behind the monster feelgood hit "Get Lucky". Two of the best songs so far in 2013, for sure! 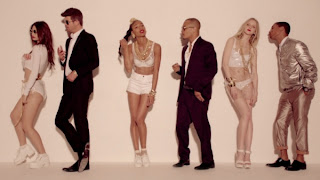