One of Scottish synth pioneers Simple Minds' real classics, "Love Song" was the lead single from their 1981 album Sons And Fascination. It's a hypnotic piece of pop music, released after the band's first true transitional period, that took them from their Roxy Music/Velvet Underground-influenced beginnings into a more decidedly European soundscape, part Bowie/Eno's Berlin records, part krautrock, part something entirely new. It's in every way urban music, a song that would have stood well alongside Philip Glass' music for Godfrey Reggio's Koyaanisqatsi film, if it wasn't for Jim Kerr's stirring vocals. The entire Sons And Fascination album and its companion piece Sister Feelings Call are worth listening to, with some amazing songs. Tonight I'll see the band perform "Love Song" and other classics from their first five albums as part of their current tour in support of the new X5 box set compiling them all into a neat and cheap little package. Lucky me! 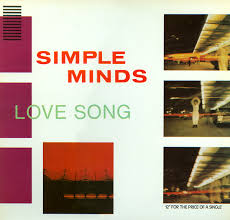