This song was actually released last summer when I heard it briefly on the radio, had no idea who played it, forgot about it and was blissfully reminded about it when Sirkus Eliassen released their new single "Æ vil bare dans" a week or two ago. "Hjem til dæ" is a perfect party song, a hedonistic and carefree track that shows an uncondinational admiration for a woman who despite being intelligent wants to sleep with the singer. The video is pretty good too, showing a party that looks like a lot of fun. 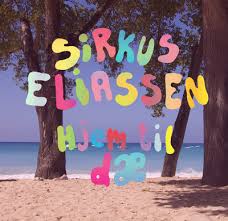