Last night, February 21st, Simple Minds' retrospective 5 X 5 tour took the Scottish band to Oslo, Norway. At times it was extraordinary, but unfortunately, at other times not as good. 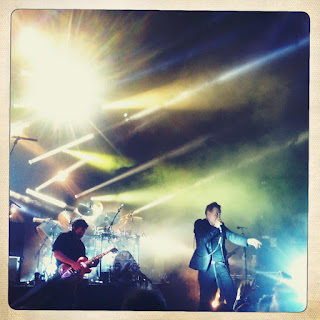 This tour is an interesting one. The band disregard all their big stadium hits of the mid- to late-90's, in favour of songs from their first five albums that have recently been collected in a neat little package titled X5. In chronological order the albums are Life In A Day and Real To Real Cacophony (both released in 1979), Empires And Dance (1980), Sons And Fascination and its companion piece Sister Feelings Call (1981) and finally their true masterpiece, New Gold Dream (81-82-83-84) (1982). The funny trick revealed in the tour name 5 X 5 is that they play five songs from each of these albums every night. It would have been a fantastic idea if all the albums were good enough. Alas, they aren't.

But hey, parts of the show were absolutely terrific. The band entered the stage playing hell out of Empires And Dance's "I Travel", one of their best songs that mysteriously enough failed to become a hit, although their record label at the time of release, Arista, made more than one attempt to break it. Singer Jim Kerr immediately displayed his trademark whirlwind antics, captured the audience's attention and kept it for the first part of the concert, through quite a few of the lesser known songs. These included gems like "This Fear Of Gods" and "Thirty Frames A Second" (both from Empires And Dance), "Premonition" (Real To Real Cacophony), and the punkish "Wasteland" and the title track from debut album Life In A Day. Also included in the first half of the show was a monster version of "Love Song" (Sons And Fascination).

The band's current line-up is excellent, with Kerr and guitarist and co-founder Charlie Burchill as the core members, augmented by bassist Ged Grimes (who used to be in Danny Wilson), keyboardist Andy Gillespie and drummer Mel Gaynor who first joined Simple Minds in 1982.

After a short break things began to fall apart. A thrilling run-through of "The American" and fine versions of moody pieces "70 Cities As Love Brings The Fall" and "Sweat In Bullets" suggested they would continue in excellent form, but then the boring songs entered the evening's fun and started to unravel all that was good. If you're not a die-hard, very nerdy fan, you simply don't care about early songs such as "Calling Your Name", "Factory" and "Scar". As these songs are played the technician is tweeking knobs and turning the volume up significantly, ruining the crystal clear sound that was, which turns the eagerly awaited "Promised You A Miracle" and my favourite Simple Minds song "Someone Somewhere In Summertime" into some sort of aural mush.

The encores begin with the wonderful instrumental "Theme For Great Cities", Sister Feelings Call's majestic opening track, before Jim Kerr re-enters the stage as the band do a good version of "Celebrate" (which is actually tonight's sixth song off Empires And Dance, one more than what is strictly "allowed"). That they choose this moment in the show to do "Someone" and "Chelsea Girl" off their not excellent debut album is nothing short of mysterious. Finishing off with "Glittering Prize" and "New Gold Dream" is of course the right thing to do, but some of the magic has been lost along the way, and the sound is still pretty bad.

I love the idea of Simple Minds doing a retro tour like this one, not playing huge hits like "Don't You (Forget About Me)", "Alive And Kicking" and "Belfast Child", but doing five songs off five albums is very restricting. As I've suggested, there are not enough good songs on the first two albums to pull this off. Imagine a show where they play all the songs from New Gold Dream and other choice cuts such as "Seeing Out The Angels", "In Trance As Mission" and "Boys From Brazil". Now that would have been a night to remember! This was good, at times absolutely amazing, but just as much a missed opportunity. I had great fun all the same though!
Lagt inn av Eriks musical diary kl. 17:46