Grace Jones' version of the 1979 Pretenders song off their eponymous debut album, far surpasses the original. The following year Jones went to the Compass Point Studios in Bahamas to record Warm Leatherette, the first of three legendary albums, with Chris Blackwell, Sly and Robbie and their gang. The reworking of "Private Life"" is one of the best recordings of everything they did for all three albums. Grace Jones delivers the lyrics directed at a man who pathetically tries to chat her up discussing his marital problems with ice cold detachment and a certain well-deserved cruelty. As great as the original is with its excellent reggae arrangement it pales in comparison with what the pros can do, as evidenced here. Having said that, there is absolutely nothing wrong with Chrissie Hynde and her band's delivery. 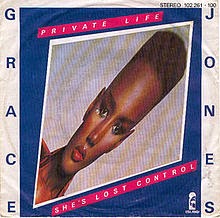