"Latch" is one of many great tracks on Disclosure's recently released hit album Settle, and I have posted the music video earlier. This version however, was performed live in January, and it's fun to actually see the boys perform, especially when guest singer Sam Smith goes all castrato. He's got an impressive voice, as is also evident of course on his guest spot at Naughty Boy's hit single "La La La". And Disclosure? The sound of the future. Great stuff. 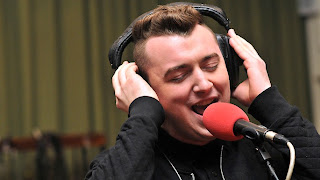