Since becoming house band for TV show Late Night With Jimmy Fallon in 2009, The Roots have backed an enormous array of artists, ranging from Bruce Springsteen to Mariah Carey, and beyond. Elvis Costello has been on the show three times backed by the renowned R&B/hip hop outfit, and they liked each other so much they have now recorded an entire album together. It will be released sometime this year, according to Billboard.com. 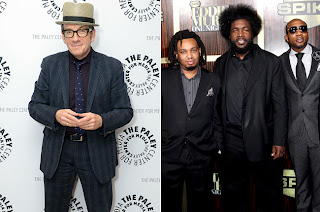