The Blue Nile - Tinseltown In The Rain

Glasgow's The Blue Nile has made some of the most wondrously brilliant pop music that's ever been recorded, but the band has never been in much of a rush. After their 1984 debut album A Walk Across The Rooftops they have released a further three albums, and it goes so slow that singer Paul Buchanan released his first solo album last year, eight years after the last The Blue Nile album. "Tinseltown In The Rain" may be their most famous song, and it first appeared on the debut album. This version however was recorded live at the TV show Later... with Jools Holland when the band appeared there in 1996 to promote third album Peace At Last. Terrific stuff. A Walk Across The Rooftops and its follow-up album Hats were re-released late last year as highly recommended deluxe editions featuring extra discs worth of material. 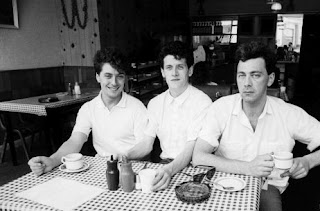