It's taken awhile, but finally Aerosmith is back with new music. "Legendary Child" is the first single from October's Music From Another Dimension album, their first since 2004's covers album Honkin' On Hobo. It's great riff rock, just like we're used to from these quarters. The video was directed by Casey Patick Tebo who's also directed the forthcoming concert film Aerosmith: Rock For The Rising Sun. Good song, good video, good to have them back. 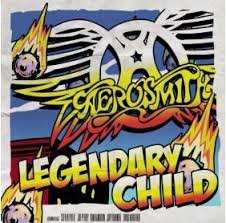