Mark Knopfler - So Far From The Clyde

"So Far From The Clyde" is a musical sibling to Dire Straits' classic "Brothers In Arms" that appeared on Mark Knopfler's latest fine solo album, Get Lucky (2009). Knopfler, originally from Glasgow but raised in his mother's hometown of Blyth, Northumberland in the north of England, has spent quite a lot of his songwriting skills to lament the decline of the British working class, the closed down mines, shipyards and such, as is also evident in "So Far From The Clyde", following a ship on its last journey before demolition. It's a fantastic song, and Knopfler's guitar playing is otherworldly. 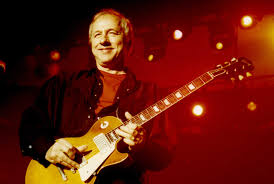