Woody Guthrie - This Land Is Your Land

Woody Guthrie was born 100 years ago today. He may be the most important singer/songwriter America has ever produced, traveling around the United States during the Dust Bowl days of the Great Depression in the 1930's and its aftermath, writing about his experiences, and turning them into songs, poems and stories. He's influenced thousand of songwriters, among them of course Bob Dylan and Bruce Springsteen, and his legacy can't be underestimated. His most famous song is "This Land Is Your Land", written in 1940, but first recorded in 1944 and then published in 1945. The song was written as a critical response to Irving Berlin's "God Bless America", that Guthrie regarded as complacent and unrealistic. Happy birthday, Woody! 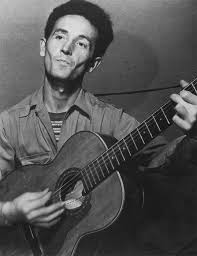