On American TV show Late Night With Jimmy Fallon, Bruce Springsteen & The E Street Band were augmented by The Roots this March for a rousing version of their 1974 classic "The E Street Shuffle". This weekend as both Springsteen & The E Street Band and The Roots were playing at the Danish Roskilde festival they repeated the performance in what apparantly was a three hour long show for the history books, according to reviewer Geir Rakvaag of Norwegian newspaper Dagsavisen, one of very few music scribes I actually trust. Wish I was there, but at least, here's the performance from Fallon's show and it's a wild ride. Party hard! 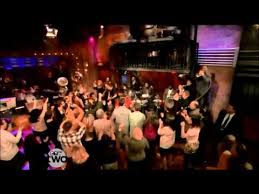