"It's easier to leave than to be left behind", sings Michael Stipe in the stunning chorus to "Leaving New York", the first single from R.E.M.'s 2004 album Around The Sun. True dat! Mysteriously though, this single failed to enter the Billboard Hot 100 chart, making it the first lead single from an R.E.M. album not to reach the top 100 since "Can't Get There From Here" in 1985. Strange, considering the quality of this classic R.E.M. ballad, that sounds like them in a nutshell. Great song! 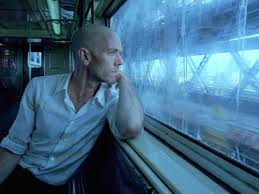