The German synthpop outfit Propaganda followed up their atmospheric and experimental debut single "Dr. Mabuse" with the slightly more normal and "poppy" single "Duel" in 1985. The song became their biggest hit, and was followed a few months later by their first album, the brilliant A Secret Wish, where both singles were included. A Secret Wish was re-released last year as a two-disc deluxe edition that comes highly recommended. 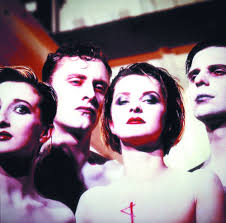