Amalie Øvstedal - Sing To Me

15 year Amalie Øvstedal is from a small place in Norway called Vestnes in Møre og Romsdal, and gained some attention from people in the music business after putting out some clips of herself singing on YouTube. According to a press release they were impressed by her "beautiful and mature voice given her young age". Her debut single is a Christmas song called "Sing To Me", a wonderful little ballad written by Silje Golden Haavet, Christian Hesselberg and Rudi Myntevik, and was produced by Rune Berg, who used to be in the sadly disbanded The Margarets and also is a current member of Number Seven Deli which is an excellent Norwegian pop band. A few days ago Amalia performed the song live in church and you can see the clip here. It's pretty good, if you ask me. 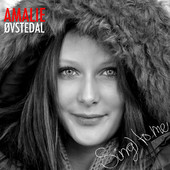