Mud's "Lonely This Christmas" was the UK number one single the Christmas of 1974, and appears today in the second window of Erik's musical Advent calendar. The "Elvissey" ballad was written by Nicky Chinn and Mark Chapman, one of the era's most popular and successful songwriting and production teams. They also worked with other glam rock acts such as Sweet and Suzi Quatro, and "Lonely This Christmas" was Mud's second number one single. It's one of my all-time favourite Christmas pop songs, a lovely and utterly sad ballad, beautifully sung by Les Gray with fabulous 50's style vocal harmonies by the other band members. 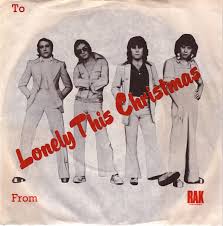