In 1981 a more or less earth-shattering record was unleashed upon the Norwegian record buying public. de Press, a trio fronted by the Polish bass player and singer Andrej Nebb and rounded out by Jørn Christensen on guitar and Ola Snortheim on drums, released their debut album Block To Block, mostly sung in Polish, with a sound unlike any other that had previously been heard in Norway. The album's producer was John Leckie, known for his work with Simple Minds, XTC, Public Image Ltd, Magazine and others, and he helped the band cement their frenetic sound. Leckie also produced another debut album at the same time, The Cut's underrated Shadow Talks. "Bo Jo Cie Kochom" is the stand out track on Block To Block, an easily accessible slice of post-punk, that helped endear (if that's the proper word) de Press to a somewhat larger audience than the band otherwise would have attracted. 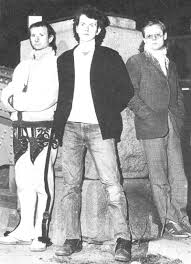