"I Think We're Alone Now" was originally a hit for Tommy James & The Shondells in 1967 when it reached number four on the Billboard Hot 100 chart. The song, written by one Ritchie Cordell, has been covered by loads of artists, and some, like Tiffany and Girls Aloud, have had big hits with it. My favourite version is by American band The Rubinoos. It was the lead single off their eponymous debut album in 1977, and reached number 45 in the US. And what a melody it has! No wonder it's been a hit so many times. 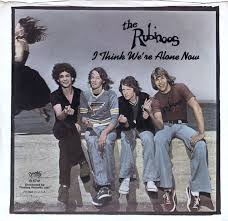