Like he did on his show The Wire, TV producer David Simon is continuing to end the seasons of his series with a great song played in its entirety set to a collage of scenes where his characters move about. For the ending of season two of Treme, his amazing series set in New Orleans after Katrina, he picked Louis Armstrong's stunningly beautiful "Wrap Your Troubles In Dreams". As the original hit recording was done in 1931 by Bing Crosby, I assume Armstrong's version is from around the same time. 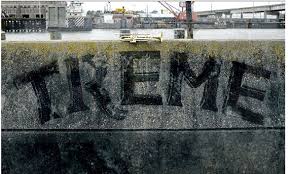