Last night we spent a good three hours watching the ridiculous but highly entertaining spectacle that is the Eurovision Song Contest, this year held in Baku, Azerbaijan, and lo and behold, the best song actually won - by miles. So congratulations to Loreen representing Sweden with the song "Euphoria", a trance number that I would normally hate but with a melody to kill for. I was never in doubt that this song had what it took.

My other favourite in yesterday's competition was very different from the winner. Estonia's Ott Lepland sang "Kuula", a big and pompous ballad, with a voice that is scary good. It carries far and wide, and the song with Estonian lyrics ("Kuula" means "listen") is really quite beautiful and ended up as number six among the 26 songs that were competing. Not bad at all for a guy that was mostly occupied with actually singing, in stark contrast to most of the competition. Congratulations, Ott! 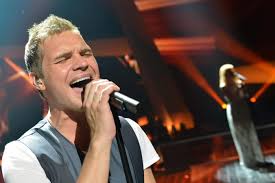