When bassist David Steele and guitarist Andy Cox decided to form a new outfit after The Beat disbanded, they spent a long time looking for the right singer. When they finally decided upon Roland Gift after listening to more than 500 cassettes, they struck gold. With an almost otherworldly voice he helped make the 1985 debut single by Fine Young Cannibals an adventure. The ska-influenced, very dance-friendly pop song "Johnny Come Home" is just like fireworks, shooting off the ground like a rocket and staying in the air for quite some time, gaining momentum and intensity. The video is also fantastic. All you see is the band playing and evidently having a really good time. It's especially fun to watch the legwork of Cox and Steele. These boys are working! 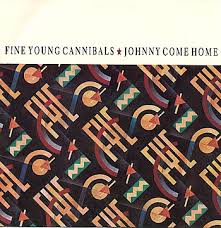