Album review: Duran Duran - All You Need Is Now

Duran Duran lost me after their second album Rio (1982). I was never ready for the sound of songs like "Union Of The Snake" or "The Reflex", and after a while they simply became boring, hitting bottom with the decidedly unimpressive cover collection Thank You (1995). Maverick producer Mark Ronson seems to agree with me as he told Simon Le Bon, Nick Rhodes and the other guys that they should try to make the actual follow-up to Rio when approached to co-produce their new album. So in a sense All You Need Is Now can be regarded as Duran Duran's third album that was never recorded - until now.

It was released digitally just before Christmas as a nine track album. This week it was finally released on CD, expanded to 14 tracks - or 16 as in the deluxe edition I've bought. (Clever bastards, they made me buy the album twice!) Although I like my albums short - ten songs is usually just fine - it hasn't suffered much by getting some extra weight added to it. Although most of the great songs were already there, the new track "Mediterranea" is better than most, and the others - including a few instrumental snippets - sort of ties it all together.

And it actually does sound like Duran Durans lost third album. "Leave A Light On" is the stand-out track, reminiscent of the classic "Save A Prayer", still the band's most beautiful song. First single and opening track "All You Need Is Now" vaguely resembles the Bond theme "A View To A Kill", "Being Followed" is a first cousin to "Planet Earth" or "Careless Memories", "Girl Panic" is a fatter, funkier version of "Girls On Film" and the epic "The Man Who Stole A Leopard" is this album's "The Chauffeur". You can possible trace the origins to most of the other songs as well, but I won't bother with that. I'll also briefly mention that Ana Matronic of The Scissor Sisters and Kelis are guest singers on the album.

To be honest, I never thought it would come to this, me liking a new Duran Duran album. And not only do I like this, I love parts of it, and the whole thing is simply great fun. A big thank you goes out to Mark Ronson for setting things straight!

Watch the video for All You Need Is Now 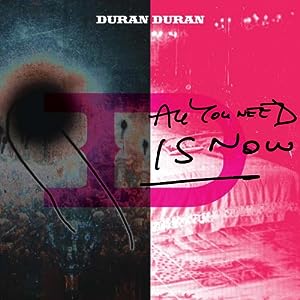