ABC - The Look Of Love

ABC were loosely associated with the new romantics movement in the early 1980's alongside bands such as Spandau Ballet and Visage. They soon turned into a full-fledged pop band though, albeit a quite romantic one at that. Their debut album was called The Lexicon Of Love (1982) and the biggest hit off it was the wonderfully romantic "The Look Of Love". It was brilliantly produced by Trevor Horn (Yes, Buggles, Frankie Goes To Hollywood, Seal, etc.) with lush strings and a "big" sound. The music video is also a piece of art in itself, inspired both by the Mary Poppins film and Punch And Judy style puppet shows, with the band members wearing Edwardian style light summer suits. It's playful and funny and perfectly accompanies the song. 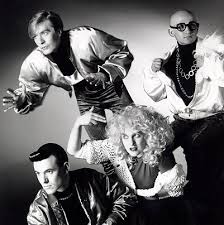