The man who murdered Unknown Pleasures

Peter Hook, of Joy Division and New Order, never had a reputation for being an especially nice guy, but he's a hell of a bass player with a very distinct style where he treats his bass almost like a guitar. Refusing to revive New Order, he's instead formed his own band, the "super group" Freebass which has yet to make a dent in... well, anything.

So instead he's opted to tour the world playing the classic Joy Division debut, Unknown Pleasures (1979), in its entirety. Bad idea, which he has rightly been criticized for. When Hook and his band The Light visited Rockefeller Music Hall in Oslo last night, it was also without the aid of back up-singer Rowetta Idah, formerly of Happy Mondays. It turned out to be a grim night, indeed.

First of all, Peter Hook can't sing. Also, he can't sing and play at the same time. But wanting to be a front man, he's recruited an extra bass player to do all the work, while he concentrates on the singing himself. A terrible idea as he can barely carry a tune, and least of all emulate the great Ian Curtis who took his own life prior to the release of Joy Divisions second album, Closer (1980). When Hook is trying to sound like Curtis, the words are uttered more like farts, and at no time during the entire show does he sound even vaguely similar to Curtis. The former singer's tortured, haunted voice, so full of dread, hurt, confusion and vulnerability, is replaced by a guy who might as well have tried to sing the phone book. And as the great bass player doesn't play much more than the intros to the songs, it gets truly pathetic. He's standing in front, vainly trying to pose as a rock star which he by no means resembles, and he seems quite uncomfortable too, the crowd not being overtly enthusiastic.

This is the sight of a man who has left his dignity in a long forgotten sewer somewhere ages ago. He pisses all over the memory of Ian Curtis, he also pisses all over one of rock music's great albums. All we can do now is play the album as it's supposed to sound, in an attempt to grab it back from the clutches of the scavenger Peter Hook. I can barely remember having seen or heard anything as embarrasing as this before, and I have seen Stiltskin!

Nothing good about the gig at all then? Not really. The band was really not that bad, but I pity the musicians who have to be part of this rubbish in order to make a living. 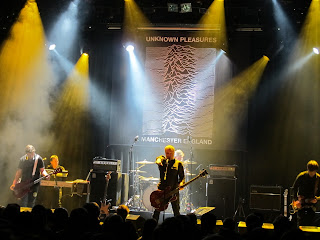