In November the amazing Alicia Keys will be releasing her fifth album, Girl On Fire. The first promotional song off it, "New Day", was released to radio a few months ago, and now the title track has been released as the first official single. It's a wonderful up-tempo ballad in the best Alicia Keys tradition featuring a guest spot from Nicki Minaj, dubbing it the "inferno version". "Girl On Fire" is also released without the Minaj intro and middle break, but her contribution should be heard so that's the version I've picked for you. 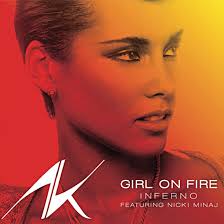